St Wenceslaus Catholic Church is a beautiful example of Gothic architecture with amazing artistic treasures.  Join us and explore the uniquely Czech-inspired art and stained glass windows of this historical church.  Imagine yourself in the enchanted land of Bohemia.  Welcome to our friendly parish! 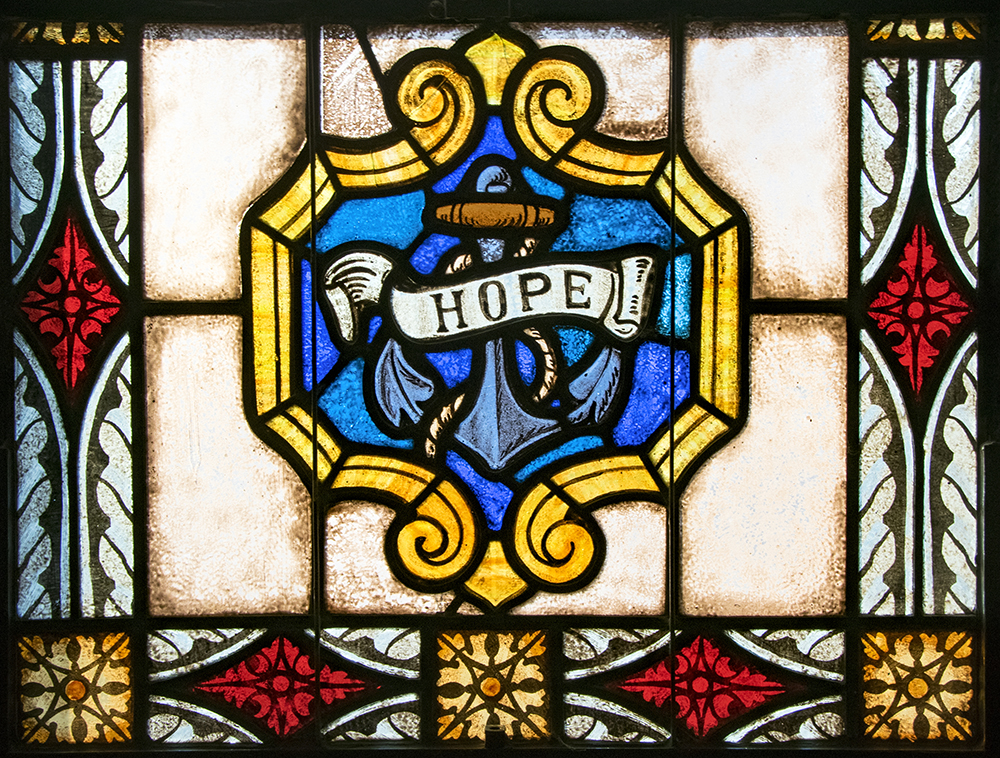 RIGHT: Directly above the altar and tabernacle is the large rose window depicting St. Wenceslaus in military gear riding a horse. An enduring legend claims an army of knights sleeps under Blaník, a mountain in the Czech Republic. They will awake and, under the command of St. Wenceslaus, bring aid to the Czech people in their ultimate danger. There is a similar legend in Prague which says that when the Motherland is in danger or in its darkest times and close to ruin, the equestrian statue of King Wenceslaus in Wenceslaus Square will come to life, raise the army sleeping in Blaník, and upon crossing the Charles Bridge, his horse will stumble and trip over a stone, revealing the legendary sword of Bruncvík. With this sword, King Wenceslaus will slay all the enemies of the Czechs, bringing peace and prosperity to the land.

St. Wenceslaus (also known by Vaclav) was born in A.D. 907 near Prague and was the son of Duke Vratislav and his wife, Drahomira. His twin brother was Boleslav. When Wenceslaus' father died, his mother took over the throne since Wenceslaus was too young. He went to live with his grandmother, Ludmila, who instilled in the young prince a love of Christian values.

Drahomira was openly anti-Christian and actively persecuted the Christian community.  When she became suspicious of St. Ludmila's influence over Wenceslaus, she had her killed.

When Wenceslaus became of age, he took over the throne as Duke of Bohemia, banished Drahomira, and began to remedy the harm she had done. He recalled exiled priests, built new churches, and enacted laws that protected the Church and the poor.

When Wenceslaus' son was born, his brother Boleslav was no longer successor to the throne, and so he joined a group of dissenting Czech nobles. They plotted to kill Wenceslaus, and so one day, Boleslav invited Wenceslaus to a religious festival, and as he was on his way to Mass, three of Boleslav's companions fell on him and stabbed him to death. As he fell, Boleslav ran him through with a lance.

An interesting fact . . . although Wenceslaus was only a duke (Duke of Beohemia) during his lifetime, Holy Roman Emperor Otto I posthumously "conferred on [Wenceslaus] the regal dignity and title," which is why he is referred to as "king" in legend and song.

St. Wenceslaus is the patron saint of Bohemia and his feast day is Sept. 28. 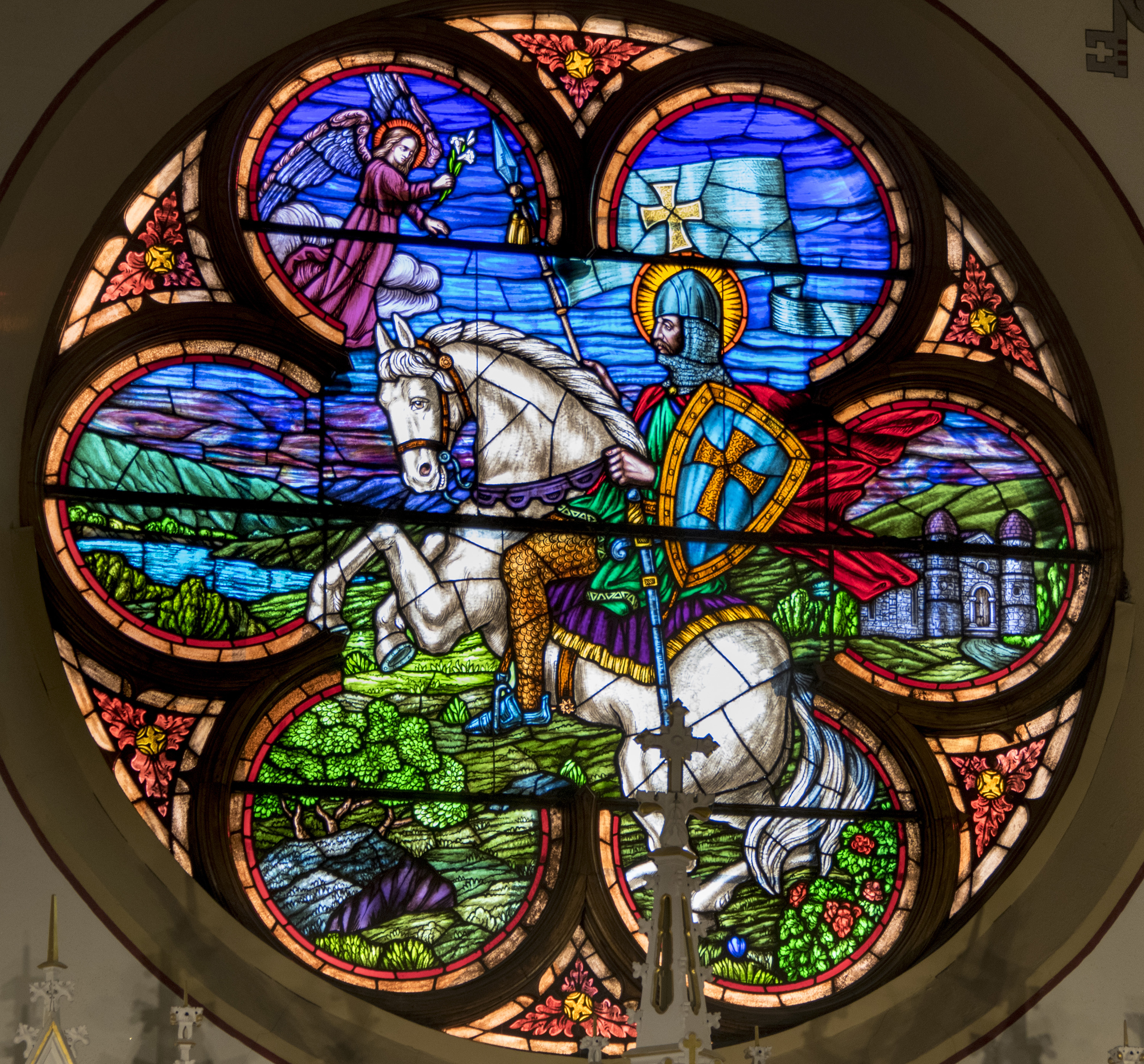 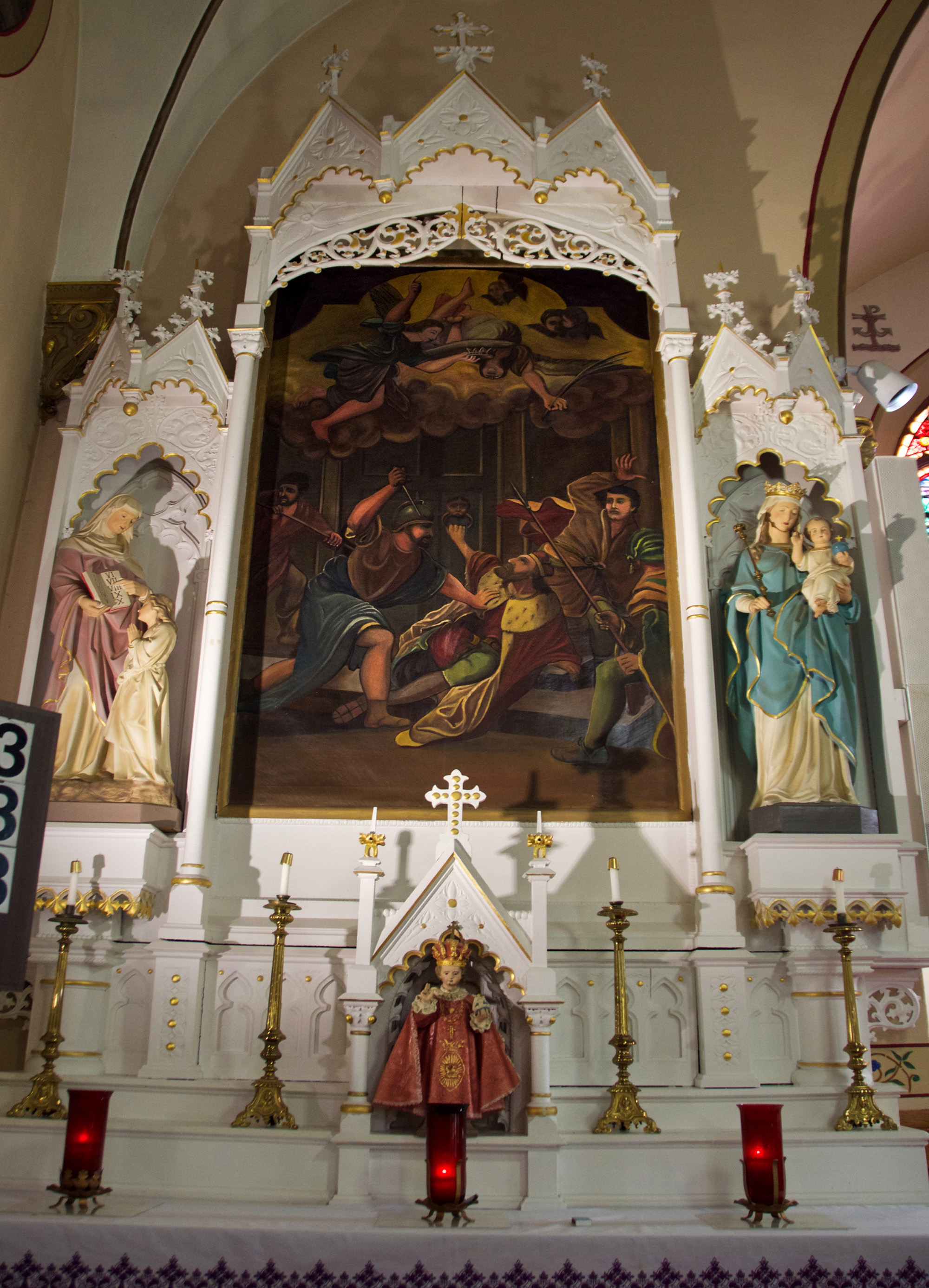 RIGHT SIDE: The painting above St. Joseph's altar is of Radislav, a chieftain who rebelled against King Wenceslaus. After seeing a vision of an angel, he knelt in submission and obedience. On either side of the painting are statues of St. Joseph with the Child Jesus and St. Anthony.

LEFT SIDE: The painting above the Blessed Virgin's altar is Wenceslaus being killed by his twin brother Boleslaus and other henchmen, on the steps of the church where Wenceslaus was going for early Mass. On either side of the painting are statues of St. Anne with the child Mary and Mary, Queen of Heaven.

BOTTOM LEFT: The magnificent stained-glass rose window above the choir loft is of the Eucharist, the Blessed Sacrament, source and summit of the Christian life.  So Jesus said to them, “Truly, truly, I say to you, unless you eat the flesh of the Son of man and drink his blood, you have no life in you" John 6:53   Symbolic or Literal!? 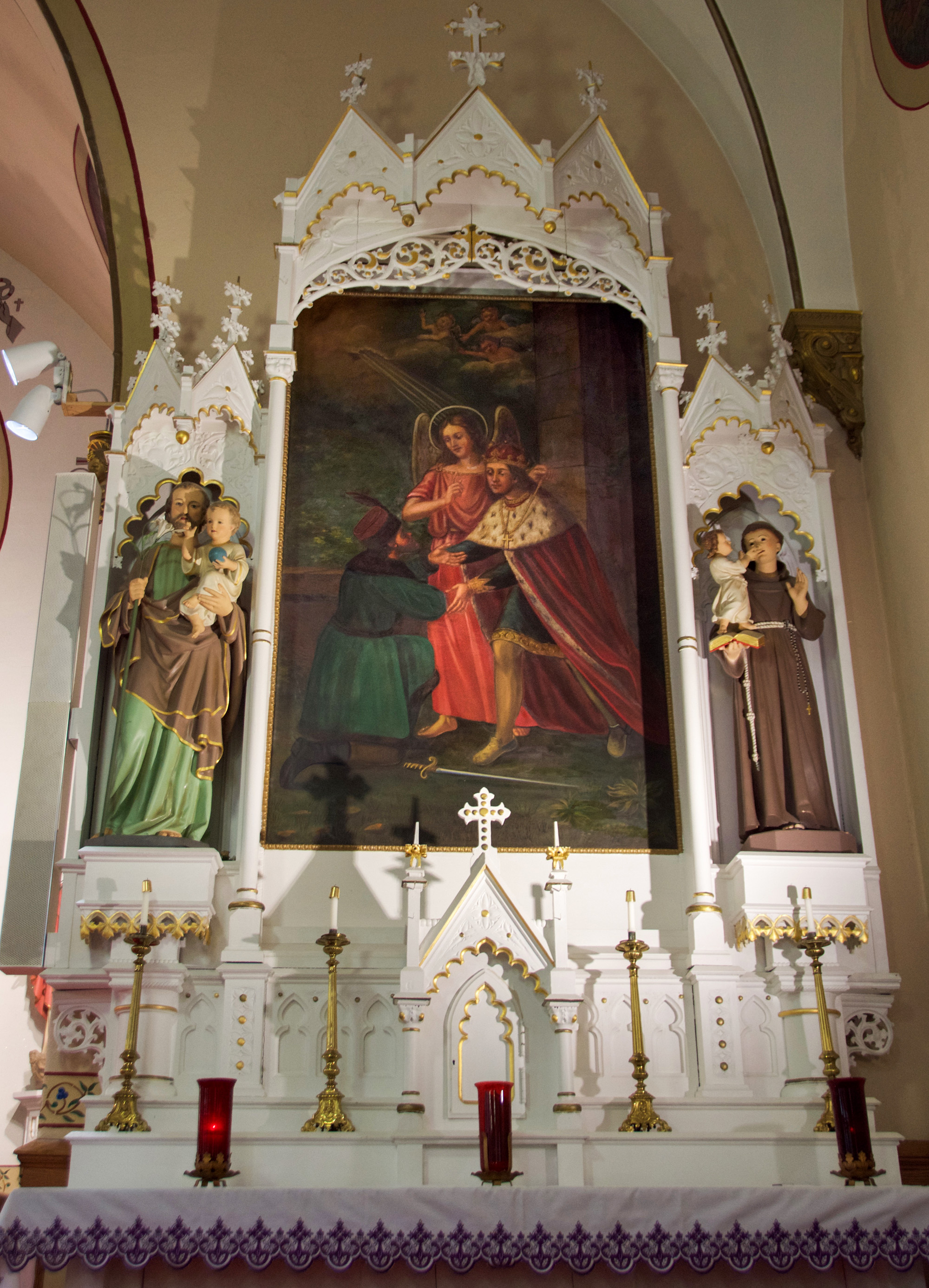 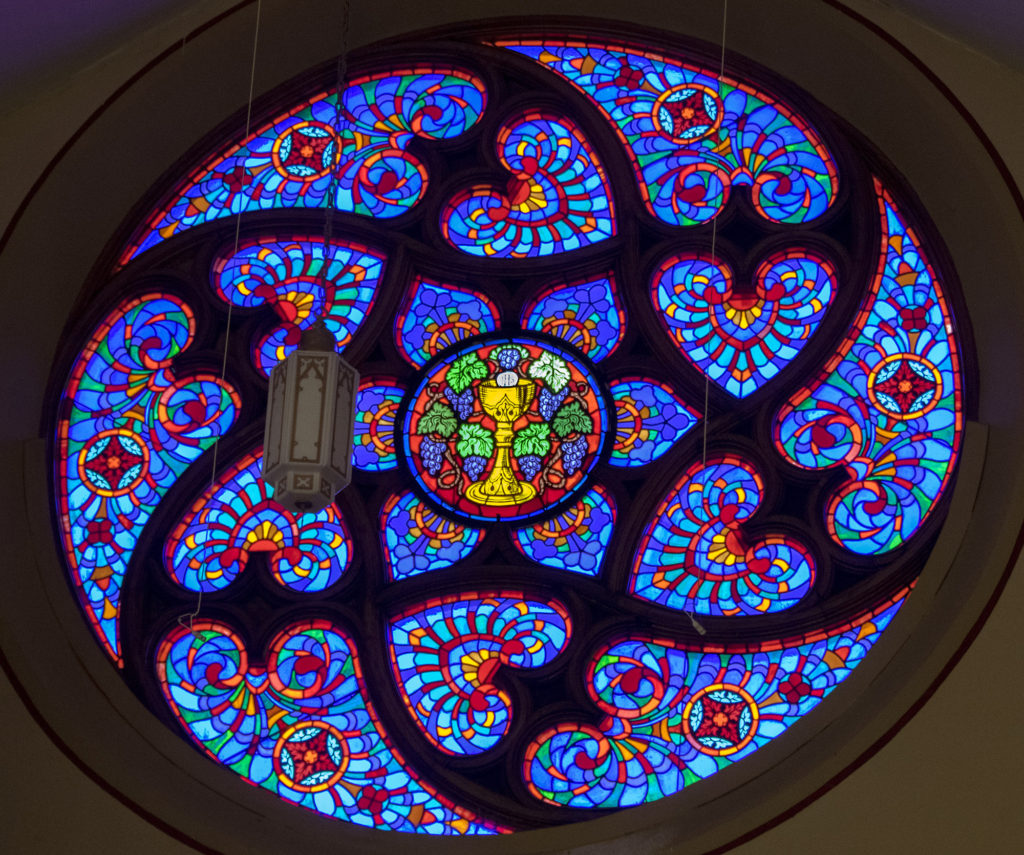 ABOVE: These paintings are found near the ceiling on each side of the Church. Each one depicts a special village or center of Christian culture in Czech lands. Click on each image to learn more about these fascinating pilgrimage sites.
ABOVE: These stained-glass windows can be seen throughout the Church. The windows depict Saints who are especially revered by the Czechs. Click each image to find out more about these holy men and women. 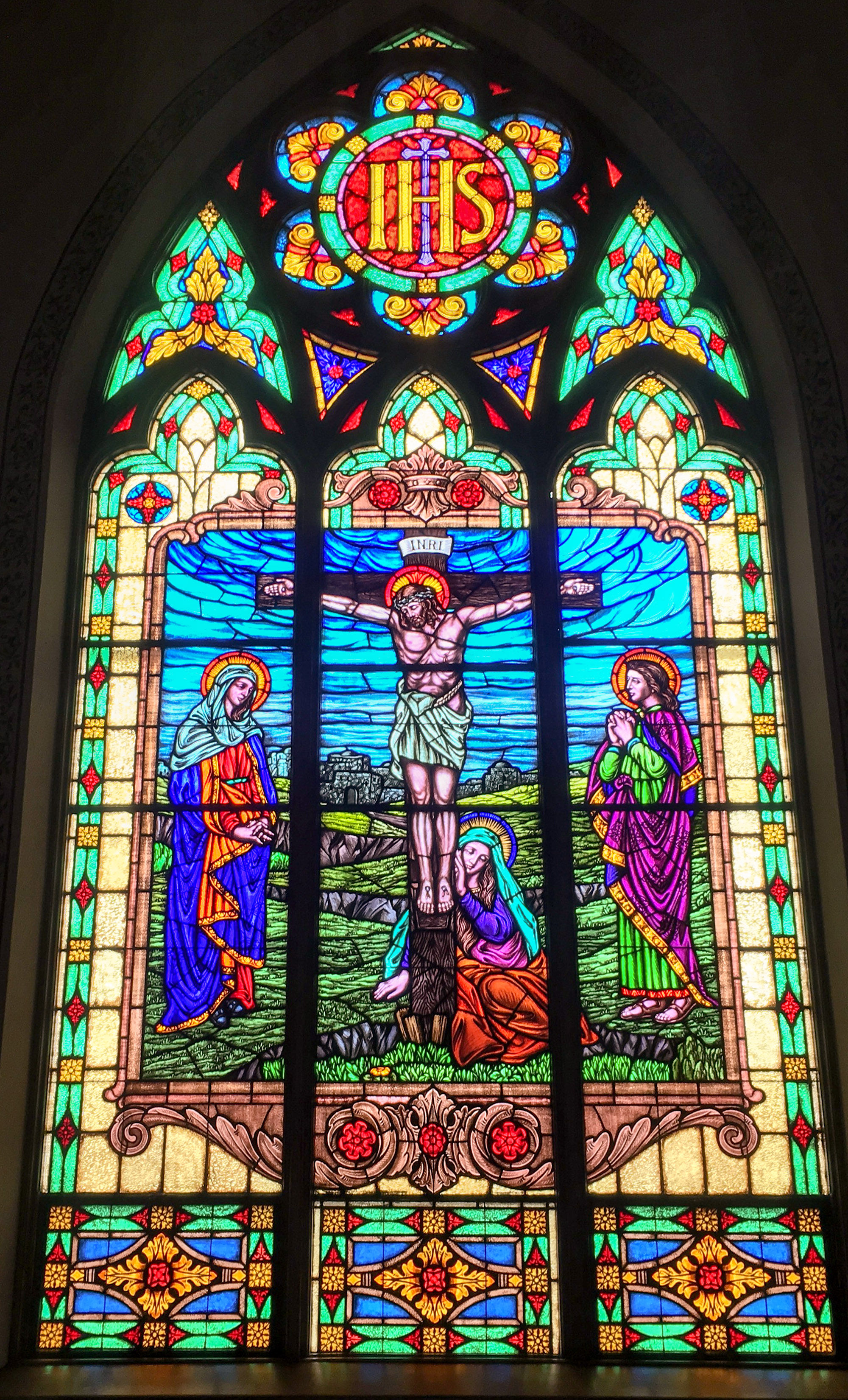 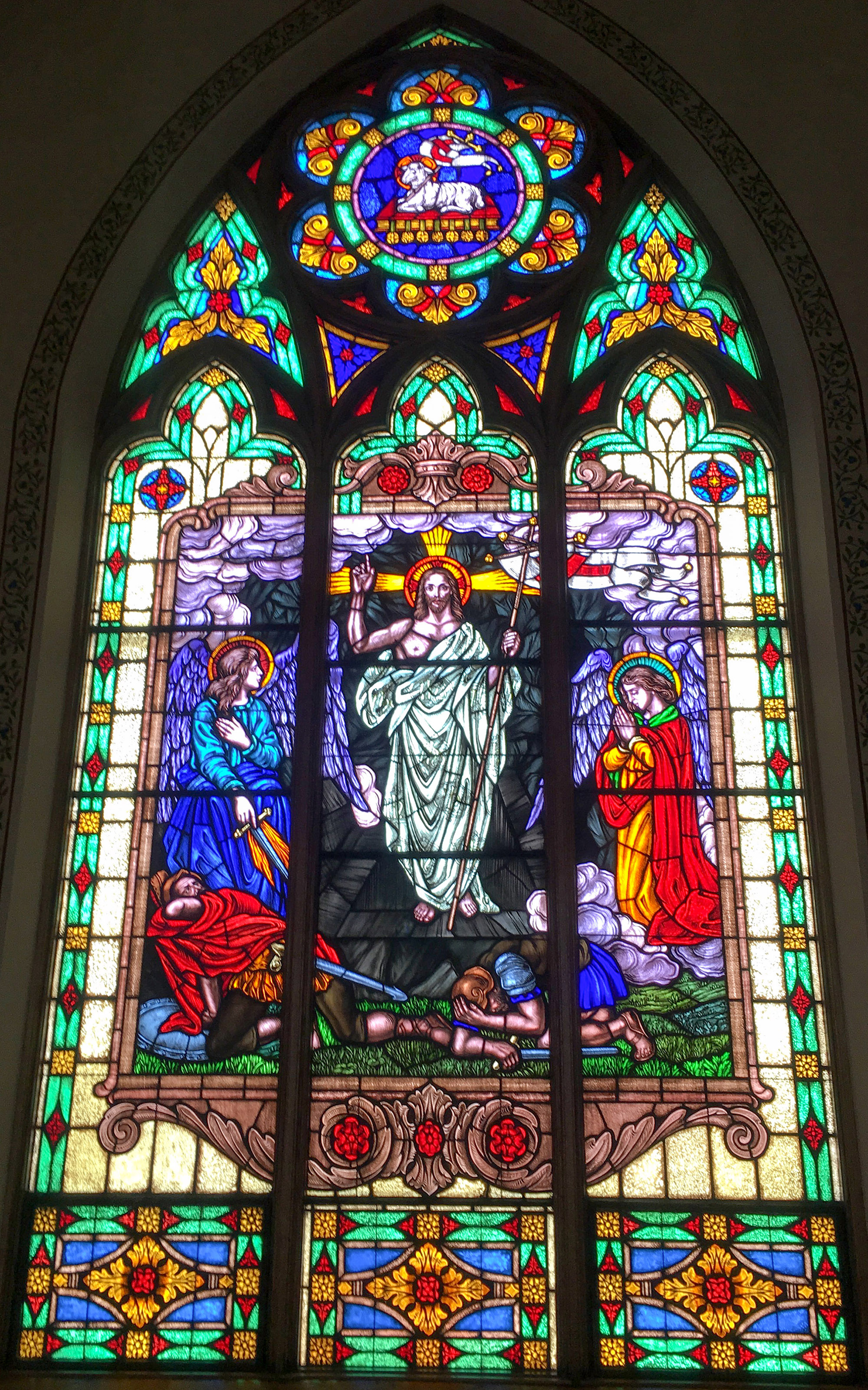